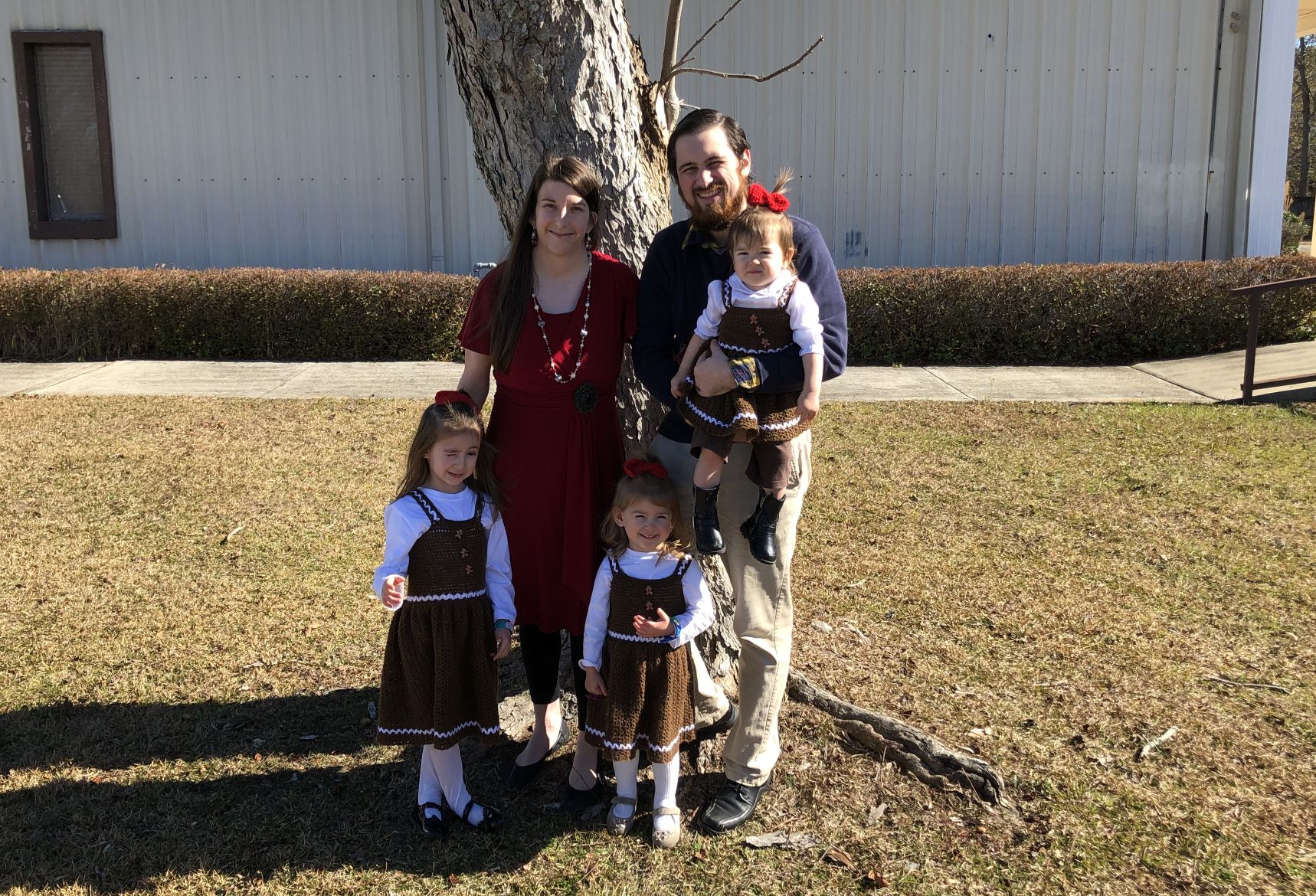 Greetings friends and family! We have successfully made it through 2020 with all its surprises and turns.

January began with a bang: Melissa’s brother Michael and his family moved from California to Mobile! It was a blessing to be able to help through the hassle of moving across the country, finding a job, and moving into a new house.

Melissa taught a cooking class at our local homeschool co-op from January until the March lockdown. It was her first time teaching in a formal setting, but she feels that all things considered, she rocked it!

In February, we attended a stunning performance of Shen Yun by Chinese acrobats and dancers. It was a great date night; highly recommended if they travel to your city.

When the coronavirus quarantine started in March, Brian switched to working at home full-time. With the increase in family time, we made fruit sushi, held a glow-in-the-dark party for Brian’s birthday, and made a zombie apocalypse video.

In May, Brian got Lasik, so he has been without eyeglasses and contacts for the first time in over 20 years!

Also in May, we saw family for the first time since the March outbreak. We rented a four-story mansion AirBnB with Brian's mom, most of his siblings, and their spouses for a week of billiards, swimming, movies, board games, and just catching up.

The first Saturday in June saw the inauguration of Koserstag, a family holiday celebrating us! We decided on official food, traditions, dress, songs, and even art. It easily became a favorite holiday, and we can’t wait for it to come again in 2021!

June also featured Lydia's ballet recital and a cheese party where we sampled over 20 different cheeses with friends.

Lydia requested a tea party for her birthday in September, attended by Amber, cousin Ruth, and friend Livvy. The girls dressed up, ate hors d’oeuvres, decorated a cupcake, and behaved beautifully for a perfect birthday.

September and October brought two fierce hurricanes, but thankfully we only lost power for a day and internet for a couple days.

November was full of family! Melissa’s parents, sister Melody, brothers Tim and Michael, and their families drove with us to Gatlinburg to spend a week at the Westgate resort. While there we enjoyed an indoor waterpark, complete with a lazy river, waterslides, and giant bucket. We rode open-air gondolas up to Anakeesta (quite frightening for parents with three young children) where we experienced a two-person roller coaster (Lydia and Amber’s first!), climbed rope bridges and tree houses, and saw a black bear foraging in the distance. Another day, we drove high up into the mountains toward Clingman’s Dome, hiking the last mile or so. It was frigid that day and the path was often steep, but somehow we made it up to the incredible panoramic view at the top, even while pushing Penny’s stroller. On the last day, we played some mini golf in Pigeon Forge.

Melissa’s parents alternated staying with us and the Binzels for the remainder of their visit. Christmas Day was perfect—we had a terrific breakfast on a beautifully-laid table, read the Christmas account in the Bible, opened presents, and spent the rest of the day at Michael and Esther’s house playing games. The next day, Melissa’s parents flew out of New Orleans to return to Honduras, and after dropping them off Melissa, Tim, and Michael visited the Lego store.

Another year brings new accomplishments: Lydia can read better than many ten-year-olds. Amber is speaking (mostly) clearly and can jump off the top of the couch. Penny can climb everywhere and is surprisingly good at hide-and-seek.

Brian and Melissa each read 100 books and podcasted about their feat.

Melissa attended a Ladies’ Bible Study during the first half of the year, and they discussed the book “Lies Women Believe” by Nancy Demoss Wolgemuth. She recommends it for women of all ages. Melissa was also given the opportunity to begin leading the church children in choir, and has enjoyed their sweet playfulness and desire to learn.

What a year! God knows where 2021 will lead us, but we know that it’s in His good hands. May the new year be a time when we all grow closer to each other and trust more in God’s sovereignty.

Much love from Brian, Melissa, Lydia, Amber, and Penelope